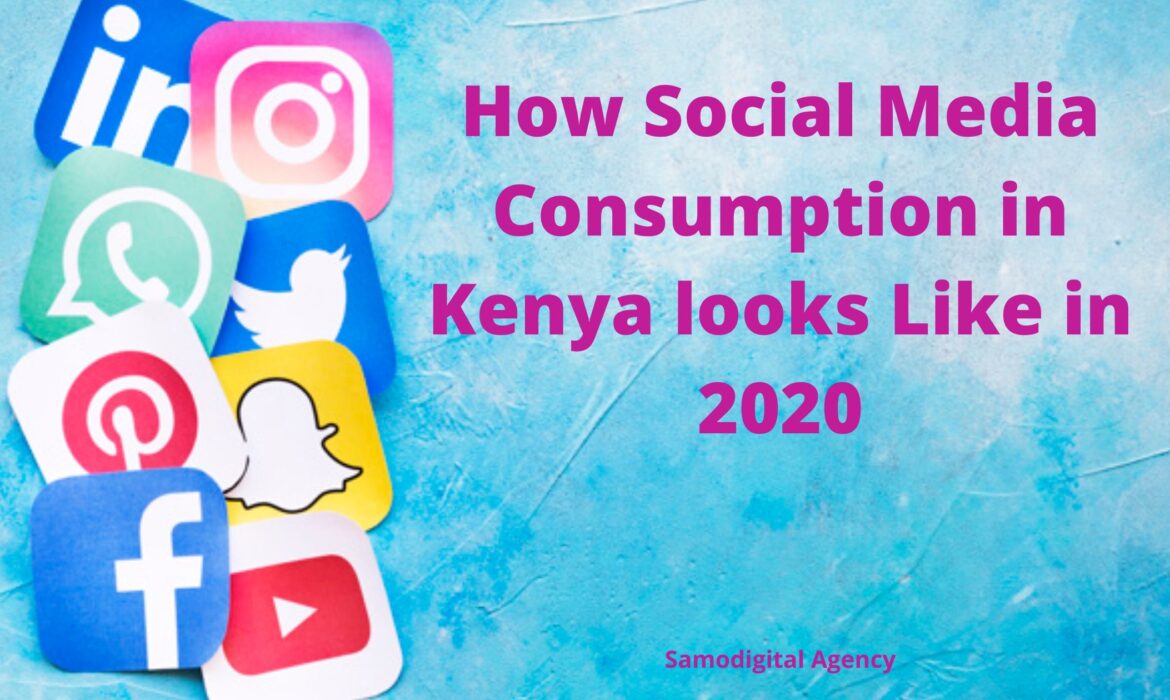 How Social Media Consumption in Kenya looks Like in 2020

How is social media consumption in Kenya in 2020?

What is Social Media?

Before we look at the social media statistics in Kenya in 2020, we must first define the term
social media. Social media can be plainly defined as tools or platforms that are internet-based that enables you to connect, communicate, interact, and share content instantly and efficiently.   Some of the popular social media platforms include Facebook, Instagram, WhatsApp, TikTok, Twitter, Snapchat, YouTube, Pinterest, LinkedIn, to mention a few. Each social media has different usage and set of rules. In our next article we look at How Kenyans are Using Social Media. Keep checking on our blog for the next article.

What is the Average Daily time spent on Social Media?

The Global Webindex social media report shows that globally, digital consumers are now spending an average of 2 hours and 24 minutes per day on social networks and messaging apps. Now, narrowing it down to Kenya, the

At What Time Do Kenyans Spend Time on Social Media the Most?

A majority of Kenyans spend more time on social media at night and the evening with the least hours being in the morning. Click To Tweet This data is crucial for you as a brand so that you can know when it is the best time to post your content on social media.

According to the Kenya Social Media Landscape report, 2020 by USIU University SIMElab, the WhatsApp, Facebook, and YouTube are the most used social media platforms in Kenya.

The report shows that the most used social media in Kenya is WhatsApp. WhatsApp users in
Kenya amount to 89%, and it is most popular among people above 45 years. 54.5 percent of Male use WhatsApp compared to 45.4 % of females who use WhatsApp.

Daily Usage of WhatsApp by Kenyans

Looking at the report, it shows that 91% of WhatsApp users access the channel daily, with 8%accessing it weekly, while 1% use it less often. Moreover, more than 30% of Kenyans 1-2 hours on WhatsApp.

Also Read: Check Out How Much Time You Spend on Facebook And Act Now!

The third most used social media platform in Kenya is YouTube.  Yes, YouTube. I am sure you must have subscribed to a channel of your favorite vlogger, and you pop in there to check what is new. According to the data, YouTube users in Kenya in 2020 are 58.4%,
with males dominating this platform at 56.8% and females at 43.2%. Notably, YouTube in Kenya is used for entertainment purposes.

Instagram comes at the fifth position as the most used social media platform, with its
users being 37.3% almost tying with Facebook Messenger.  Looking at Instagram by gender in Kenya, the data indicates that 55.1% of males use Instagram compared to 44.8%female.

67% of Kenyans use Instagram daily, 26% use it weekly, and 6% use it less often. Kenyan
Instagram users also show that the majority spend less than 1hour on Instagram
daily.

Have you been
wondering about the number of Twitter users in Kenya 2020? Well, the report
shows that 34.4% of Kenyans use Twitter, and it is 6th most social
media in Kenya. Kenyans mainly use Twitter for Politics.  Moreover, Twitter is actively used by Kenyans
between the 26-35 years, just like Skype and LinkedIn.  Looking the gender, it is also male that dominates
Twitter at 59.5% compared to females at 40.4%.

The daily usage of Twitter is 68% of Kenyans, with 26% using it weekly a 6% using less
often. Kenyans spend less 1hour on Twitter daily.

The last social media usage platform that we are going to discuss in this article is
Telegram. Telegram is the 7th most used social media in Kenya, with its users amounting to 15.5%. It is also mostly used by Kenyans between the age of 21-25 years.  As for usage by gender, males dominate Telegram usage at 66.1% while female’s usage is at 33.8%.

For the last few days, we have seen big brands like CocaCola, Starbucks, Diageo, Unilever either pause ads or stop ads on Facebook as part of the 'Stop Hate for Profit' campaign. Now, the Indian government has banned 59 Chinese apps including the Popular TikTok, Shareit, UC Browser etc. apps citing privacy concerns

Their Ministry of Information and Technology has said that it "has received many complaints from various sources including several reports about the misuse of some mobile apps… for stealing and surreptitiously transmitting users' data in an unauthorized manner to servers which have locations outside India."

TikTok demographics shows India is its biggest overseas market for TikTok. 43% of TikTok users are Indians, that is over 120 million active users. Moreover, Apps like ShareIT were enjoying an Indian market share of 200 million monthly active users. A browser app like UC browser had garnered up to 130 Million users.

What is the impact of the ban?

Users will have to look for alternatives.

Job loss because the majority of the banned platforms have Indians as content creators.

I foresee a standoff between these two world's most populated countries

YouTube has "won" the war cause now there will be a shortage of videos.